I will be speaking at a Walk and Talk at the Ridgefield Guild of Artists, Ridgefield, CT on Sunday, Oct 1, 2017 from 3 - 5 pm about my work at the 40th Annual Juried Show. (there will be 5 artists speaking) 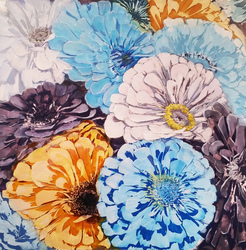 "[this] prize was awarded to Cynthia Mullins for her jewel-tone work Blue, White, Aubergine and Amber, whose captivating and lusciously rendered flower petals appear to burst from the painting’s surface," Lisa Hayes Willams, Curatorial Asistant at the New Britain Museum of American Art.

Awarded 2nd Prize for "Blue, White, Aubergine and Amber," (part of "On the Verge Series") an oil over sealed watercolor at the Ridgefield Guild of Artists 40th Annual Juried Show. Juried by Lisa Hayes Williams, Curatorial Assistant at the New Britain Museum of Art. September 2017

Story in HVNN.com, "Second Exhibition in Healing Arts Launched," with images of three contemporary floral oil paintings. http://hudsonvalleynewsnetwork.com/?s=Second+Exhibition+in+Healing+Arts (*note- picture has been flattened so pieces are not sized correctly)

A release by the National Association of Women Artists about the show, "Expressive Women of NAWA."
http://myemail.constantcontact.com/Upcoming-exhibition--Expressive-Women-of-NAWA--Ridgefield-Library--Connecticut-March-2-30--2017.html?soid=1101936361035&aid=-x3IfBWK9uY

A Path, oil on sealed paper, 8 x 12 inches, will be published in February, 2017 in Balanced Rock, The North Salem Review of Art, Photography and Literature, published by the Ruth Keeler Memorial Library. The Visual Arts Editor is Constance Sullivan, who has produced widely-acclaimed books on art and photography for major publishers including, "Landscapes of the Civil War" (Alfred A. Knopf), "Women Photographers" (Harry N. Abrams), and "Photographers at Work" (Smithsonian Institution Press).

Ridgefield Arts Council 2016 Behind the Scenes Award for work in the arts at the Ridgefield Guild of Artists. 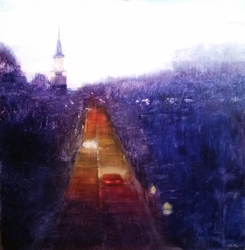 I will be speaking at a Walk and Talk at the Ridgefield Guild of Artists, Ridgefield, CT on Sunday, May 1, 2016 from 3 - 5 pm about my work at the 6th Annual Juried Members Show. (there will be 4-5 artists speaking) 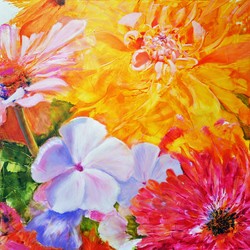 Awarded Best in Show for a group of paintings, Big Orange, Red in the Garden and Ascending at Spectrum, Natural Inspiration 2016 at the Carriage Barn Arts Center, CT.  Juried by Gabriel de Guzman of Wave Hill Public Garden, Bronx, NY. April 2016
-Pictures and Article in People section of the Ridgefield Press, 4/28/2016

-Accepted into the National Association of Women Artists, NYC  March 2015 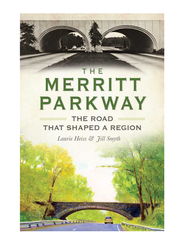 -Two paintings on the Book Cover of  "The Merritt Parkway, The Road that Shaped a Region," by Laurie Heiss and Jill Smyth published by History Press, 2014.
"Exit 46" a pastel and "Through the Woods," an oil.

-Bookmark made by the Westport, CT library with two Merritt Parkway paintings.
2013